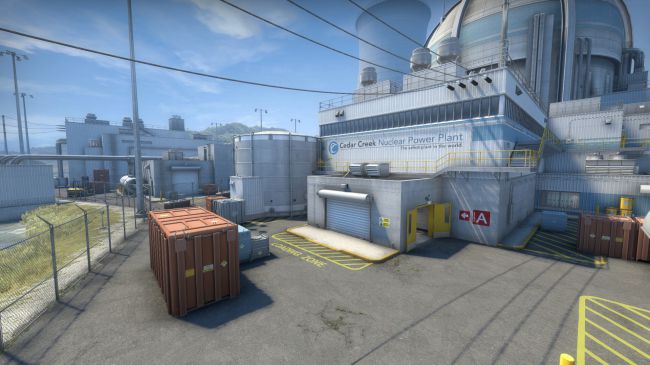 One of Counter-Strike’s oldest maps has fallen out of favour with its players. Can it be saved?

The long story of Counter-Strike is a series of minor but meaningful changes. Track the last few years of patches, and between hundreds of weapon skins, you see subtle but serious modifications to map layouts, recoil behavior, and anti-cheat. If you time-traveled a CS player from 1999 two decades into the future to play CS:GO today, they’d find it familiar enough: the AK-47 is still the workhorse of the T-side arsenal, the Nordic countries are still better at the game than everyone else, and de_nuke is still in the active map pool.

If things continue along their current trajectory, however, that last staple of Counter-Strike’s identity may be the next casualty of its ongoing evolution.

Of the seven maps in the current “active duty” map pool—that is, the maps available for players to choose from at big tournaments—Nuke is by far the least popular. So far in 2018, 214 matches of CS:GO have been played at high-level tournaments, and of all those matches, only nine have been played on Nuke. The next-least-played map sees over double the usage, with 20 appearances in high-level games over the same time period.

These numbers didn’t used to be quite so grim. The map saw more play back in 2014, when 15 of the 111 games played at major tournaments were played on Nuke, placing it firmly in the middle of the pack compared to the other active duty maps. Since then, its popularity has waned sharply, despite a graphical overhaul and substantial redesign in early 2016.

What happened to Nuke?

When I pose that question some of the game’s top-tier professionals, I learn that there’s not much of a consensus on why the map has fallen out of favour. Opinions range from believing that it’s a great map and that people just aren’t bothering to learn the unique tactics required to be successful on it, to believing it’s a fundamentally flawed map that can’t be fixed without completely reinventing it.

French pro Nathan “NBK-” Schmitt, currently of G2 Esports, finds himself close to the first position. “In general I think Nuke is a very underrated map,” he says. “I think it’s a very interesting map [due to] its layout, and that it’s very different and unique compared to other maps.”

Questioned further, NBK- offered a hypothesis. “The main thing, I think, is that teams are either very good at it, or average-to-bad on it,” he explains. “So those teams that are average or bad on it are going to be 70-80% of the teams … and the teams that can play very well on it will get the map banned because it’s gonna be a 100% win against teams that are a bit lower.”

In other words, it boils down to how large the skill disparity is between the teams that actively practice Nuke, and those that don’t bother to focus on the map because it doesn’t see much play at major tournaments. The nature of the CS:GO tournament format is that each team gets to ban at least one map from being played during any given match, so for the teams that don’t practice Nuke, it’s a no-brainer to ban it when playing against a team that’s known for their Nuke play.

Nuke’s uniqueness exacerbates this problem, too. The more ways in which the map differs from the rest of the active pool, the more bespoke strategies and map-specific knowledge are required to do well on it, and the more time a team would need to dedicate to practicing it if they wanted to catch up to the teams who already know what they’re doing on it. Nuke, with it’s unconventional bombsite placement and total lack of a traditional mid configuration, finds itself on the extreme end of the spectrum as far as divergence from the status quo.

The end result is that no one ever gets to play it except in the event that two of the few teams who do bother to practice Nuke happen to run into each other in a tournament bracket. Of course, this means that the map is stuck in a bit of a negative feedback loop. Because no one plays it, teams aren’t incentivized to practice on it, and because no one practices on it, no one wants to play on it when it comes time to pick maps during major tournament matches.

There are also criticisms to be made about the design of the map itself, from those with a less enthusiastic view than that of NBK-. Jimmy “Jumpy” Berndtsson, the current coach of Fnatic, finds himself in this camp.

“When they made a change, when they added the outer catwalk and everything,” Jumpy says in reference to the changes made in the early 2016 update, “I felt it was a bit messy in a way, because as CT you can hide in so many spots, and as T you can [attack] in so many spots.” This abundance of choices, he says, led to a higher degree of randomness in high-level play, because it became harder for players to know where they should be looking.

He’s more enthusiastic about the latest version of the map that was released in February, saying “With the new changes now, I really like the update … I think it’s more balanced in a way, you can push yard now and the CT can’t hide everywhere, and Ts can’t exploit going outer catwalk really fast.” It’s unclear whether these tweaks will be enough to break the aforementioned feedback loop.

Another issue raised—one that will be far more difficult to fix with minor balance updates—relates to the overall layout of the map. On a normal Counter-Strike map, the two bomb sites that the T side must attempt to reach are generally on opposite sides of the map from each other, with enough distance between them that it will take a player a bit of time to run from one to the other. Nuke, however, is unique in the regard; its bombsites are stacked one on top of each other, occupying more or less the same footprint, but on two different storeys of the same buildings.

“Because of the levels, you can go down under and you hear them from up top, sometimes you’re just really confused, like ‘Am I hearing him down under, or is he above me, or is he to the right or the left?’ I think that’s the most confusing part,” says Lukas “gla1ve” Rossander, current captain of Astralis.

The good news is, in contrast to the widely varying views from the pro scene on what’s wrong with Nuke, their answer of what to do about it is surprisingly unified.

“I guess three or four times a year we should just sit down with Valve and talk about what we could do better at the different maps, and especially Nuke, because there’s a lot of people not liking to play that map,” says gla1ve.

“If they’re planning on introducing a new map, [I’d like it if they] released it a bit before the major, let people try it out, then just have a meeting with all the final teams at the major and talk about the new map and what their plans for it are,” Jumpy echoes. “I know they approach some people, but they don’t have like a big meeting, just to talk through, to let teams open their opinions. I think they can learn a lot from the players, and I think the players can learn a lot from the developers.”

Even NBK-, who has few grievances with the current design of Nuke, feels like there’s room for more communication between Valve and the pro scene. “I think [it’s] important for the players to talk with Valve and tell them what is not possible on a map,” he says. “For instance if they take something out of a map, or they add something, or they change something, if most of the pro players see it as a problem, I think that should be where Valve decides to change things and listen to the players.”

The consensus is clear: Valve still needs to do more to gather feedback from the highest-level players of their game, and use that feedback to make improvements that will increase the calibre of play at the top level. Whether that will be enough to save Nuke remains to be seen, but the pro scene believes that it will be a net good for Counter-Strike in general, and has at least some chance of being able to revitalize one of the game’s most iconic locales.