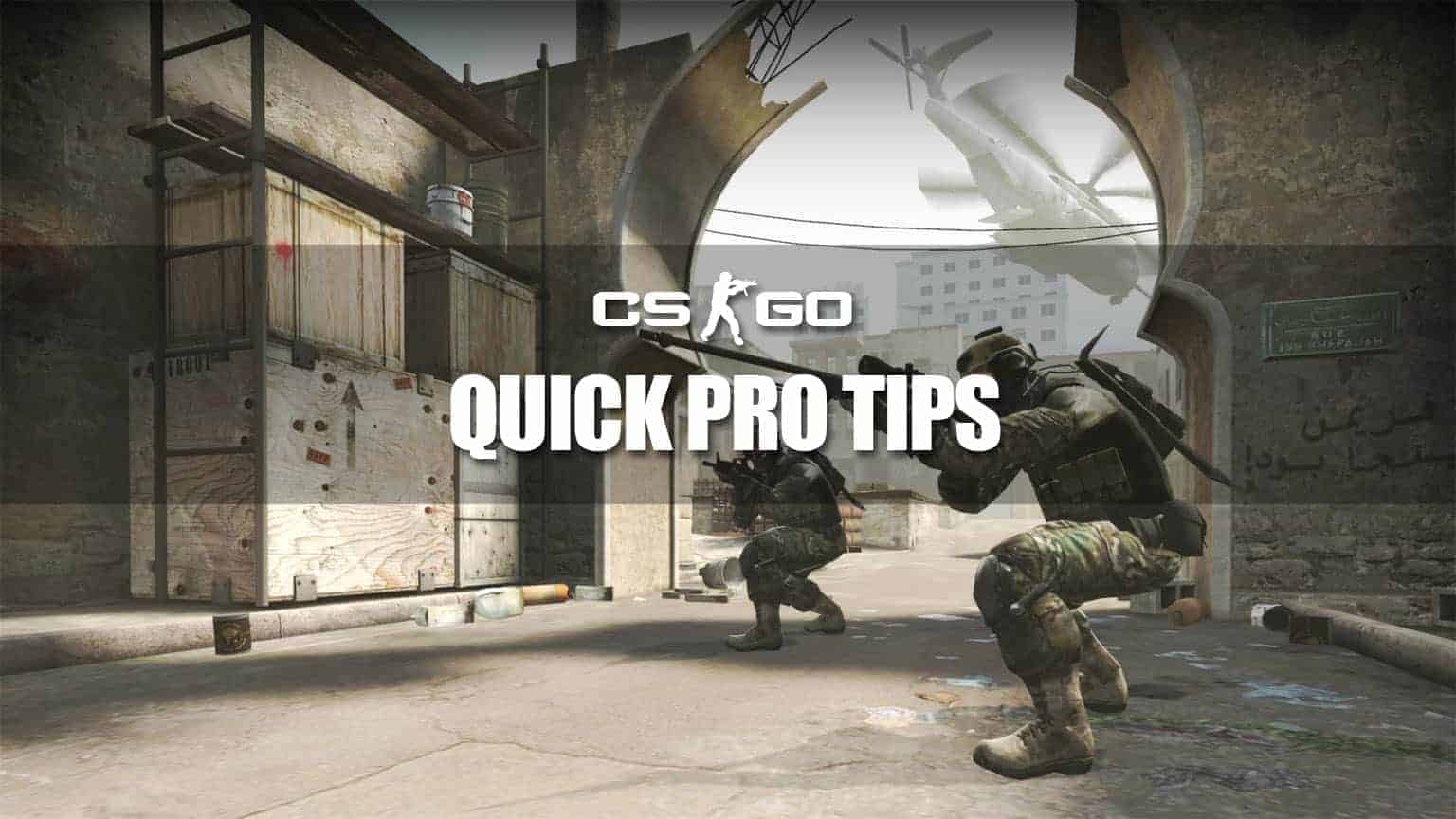 In a world where new Battlefield and Call of Duty games are released yearly, it’s a huge testament to the brilliance of CS:GO that the game is still going strong six years after its release.

There’s just something magical about the eternal battle between terrorists and counter-terrorists round after round. Whether you’re completing the mission objective or methodically taking out the opposing team, each round offers something new and exciting.

But, seeing that an average of around 300,000 players are playing at any one time, trying to learn the game as a newbie can be a tough hill to climb.

With the game aging like a fine wine, there’s no time like the present to start learning how to play and begin your climb up the ranks.

So check out this guide to help you improve your game and become the Chuck Norris of CS:GO.

I’m not going to sugar-coat it. CS:GO isn’t easy. It’s not going to be like Star Wars Battlefront, where you jump in for a few casual games, get some kills and log off again. It is very difficult. With that in mind, the first bit of advice is this: all of these other tips are going to be useless if you aren’t willing to put in the time to learn the ins and outs of the game. Just looking at player accounts in-game or on Steam, it’s common to see players with more than 1000+ hours of gameplay.

Even after 100 hours, you’ll be the rookie in town. So don’t be too harsh on yourself. Approach each game with an open mind, ready to learn and embrace the positive and negative feedback of your teammates. Better to be ready to adjust your game on the fly, rather than logging in and thinking you’re the best thing since sliced bread.

2. Get your settings right

The right mouse sensitivity will make you a crack shot in no time. (Image: Evil Jess/Valve)

You could be the most naturally talented CS:GO player in history, but the wrong settings will have you running around like a headless chicken. Now the actual settings are a matter of personal preference, and there’s plenty of audio, video and control intricacies to adjust. There’s no one-size-fits-all solution, but there are a few general rules that the community tends to go by.

It’s best you adjust your graphics settings to ensure the game runs at 144+ frames per second; if you can’t achieve that, at least match the max refresh rate of your monitor. The second thing you want to do is lower your mouse sensitivity and keep your dpi reasonably high. It’ll feel weird at first, but it allows you to be more precise with your aiming once you get used to the bigger hand movements required to turn around. You definitely don’t want to be turning and aiming like a tank, but once you’ve adjusted to the lower sensitivity you’ll find your aim becomes far more consistent.

If you’re playing around and still not too happy with your settings, then a good place to look is this website which records the settings of professional players.

3. And your hardware, too

They say that a carpenter is only as good as his tools, and this certainly applies to CS:GO. The game relies on one thing above all: quick reaction times. To perform at your optimal level, you’re going to want to get yourself a good mouse. A $10 wireless mouse from Big W isn’t going to work here. This doesn’t mean you need to break the bank, but a decent quality gaming mouse will improve your experience out of sight.

You also want to make sure that you’re using a mousepad, preferably one of a decent size that gives you some room to move. Running your mouse along your desk is a recipe for disaster and shoddy shooting. Of course, you can go out and buy the most expensive gaming rig in the world if you want to, but a good mouse and mousepad are all you really need.

This isn’t something too popular with the cool kids, but it’s going to help you destroy them on the battlefield. Aim maps are maps built in ways to make you concentrate on precision aiming. These maps put you on a course that hones your long and short-ranged aim, reflexes, using different weapons, peeking, jumping and even throwing grenades.

There are thousands of user-generated aim maps, but this video shows many of the best ones to help you become a well-rounded player.

Unlike bomb defusal and hostage rescue maps, deathmatch lets you stop worrying about objectives, rounds or the complex CS:GO economy. There are two main benefits of playing deathmatch: it allows you to practice your gunplay and teamwork without stressing about anything else, and the zero respawn time means you can get plenty of practice done quickly.

Sure, deathmatch won’t teach you the strategy and tactics necessary for other modes, but it will help you perfect your skills with each weapon.

Once you’ve mastered the basic weapons, you can make them look good with skins. (Image: niKlaS/Valve)

After you’ve been playing for a while, you’ll start to recognise that in high-level play, only certain weapons are used. There’s pretty much unanimous agreement that in CS:GO, certain weapons are better than others. When you’re playing as the terrorists you’ll want to use the AK-47, while the M4A4 is preferable on the counter-terrorist side. The majority of the time they’ll be your go-to.

From noobs to professionals, those two guns are the most used. It’s also good practice to familiarise yourself with the AWP, along with a submachine gun and pistols for when you’re strapped for cash. You can worry about fancy knife kills later. If you find yourself really struggling, you’ll be able to grow your confidence with the XM1014 automatic shotgun – just beware, you’ll probably get trolled by a bunch of angry veterans.

Once you head into the competitive maps, you’ll notice players on your team are yelling a bunch of seemingly random words. These are called map call-outs, and they are shorthand words to describe where an enemy is on the map. Words like “short”, “triple stack” and “E box” can give vital information for your team to capitalise on enemy team weaknesses and get the win.

8. Stick to your role

Of course, this will all become second nature with time. In the meantime, there is a comprehensive online guide for all the maps and their call-outs. Don’t be too harsh on yourself though, you won’t learn overnight. Just be ready to listen and don’t be afraid to ask your teammates any questions when you hear something that sounds like gibberish.

Don’t be that guy. Just don’t be. You know the type in any competitive shooter, who just goes off like a maverick and doesn’t do anything for the betterment of the team. There’s nothing worse. You’ll see this a lot in lower level play, where players tend to be selfish and impatient. Team composition and synergy is the key to winning most – if not all – games of CS:GO.

The simplest mistake to avoid is doubling up on an AWP. The AWP is a sniper rifle, and (usually) your team only needs one or none. If you see someone using one already, don’t go buying one as well. It’ll just anger your teammates since it’s rarely ever a feasible strategy. This goes for money, too. If you notice one of your teammates has no money, don’t just go and buy yourself multiple guns and forget about him. Help him out.

Another key rule is not to run off by yourself. It’s a team game, so communicate and work in the best interests of a team win. If you want to play a single-player game, there’s plenty of those around.

CS:GO’s economy system separates it from other simple shooting games. It’s quite complex, but basically: at the end of each round – win or lose – you get some money. Winners get way more money than the losers. You also get bonuses depending on kills, objectives completed and even what guns you use. For example, a knife kill rewards $1500 while an AWP kill only rewards $100.

At the end of each round, you earn money to re-equip for the next round. A key part of competing for the entire game is making sure that everyone on your team has enough money to have good gear at the beginning of each round. You’ll find that your team strategises around this, too. You might only decide to buy cheap SMGs in round two so your full team can get fully kitted out in round three. Don’t be the guy who spends all his money while your entire team is saving – it’s a bad look and will likely result in a loss.

10. Patience is a virtue

Patience in CS:GO is what separates the men from the boys and the women from the girls. When you first get started, you will probably make these mistakes, but the key is to recognise and attempt to avoid them.

On a defusal map – the main competitive style of gameplay – counter-terrorists have to stop terrorists from plating the bomb. Impatient players will push forward, seek out terrorists, and ultimately get killed. If you push out into the open, any decent terrorist team will just wait for you to make a mistake and slaughter you when you lose your patience. So, don’t.

This is the easiest way to improve your gameplay without needing superhuman shooting skills or becoming a precision grenade thrower. Waiting for the perfect time to strike and knowing when to bide your time in defence is, more often than not, the key to claiming victory.

There’s no better way to learn something than to watch a master in action. Seriously, watching my dad sit back on weekends and watch hours of cricket has just made me so good at it. It’s amazing. With that principle in mind, watching popular Counter-Strike: Global Offensive streamers on Twitch (Tarik Hazed and WarOwl to name a few) will do wonders for your ability.

Another great way to learn is by watching the insane gunplay, tactics and last-second bomb defusals in tournaments from around the world.