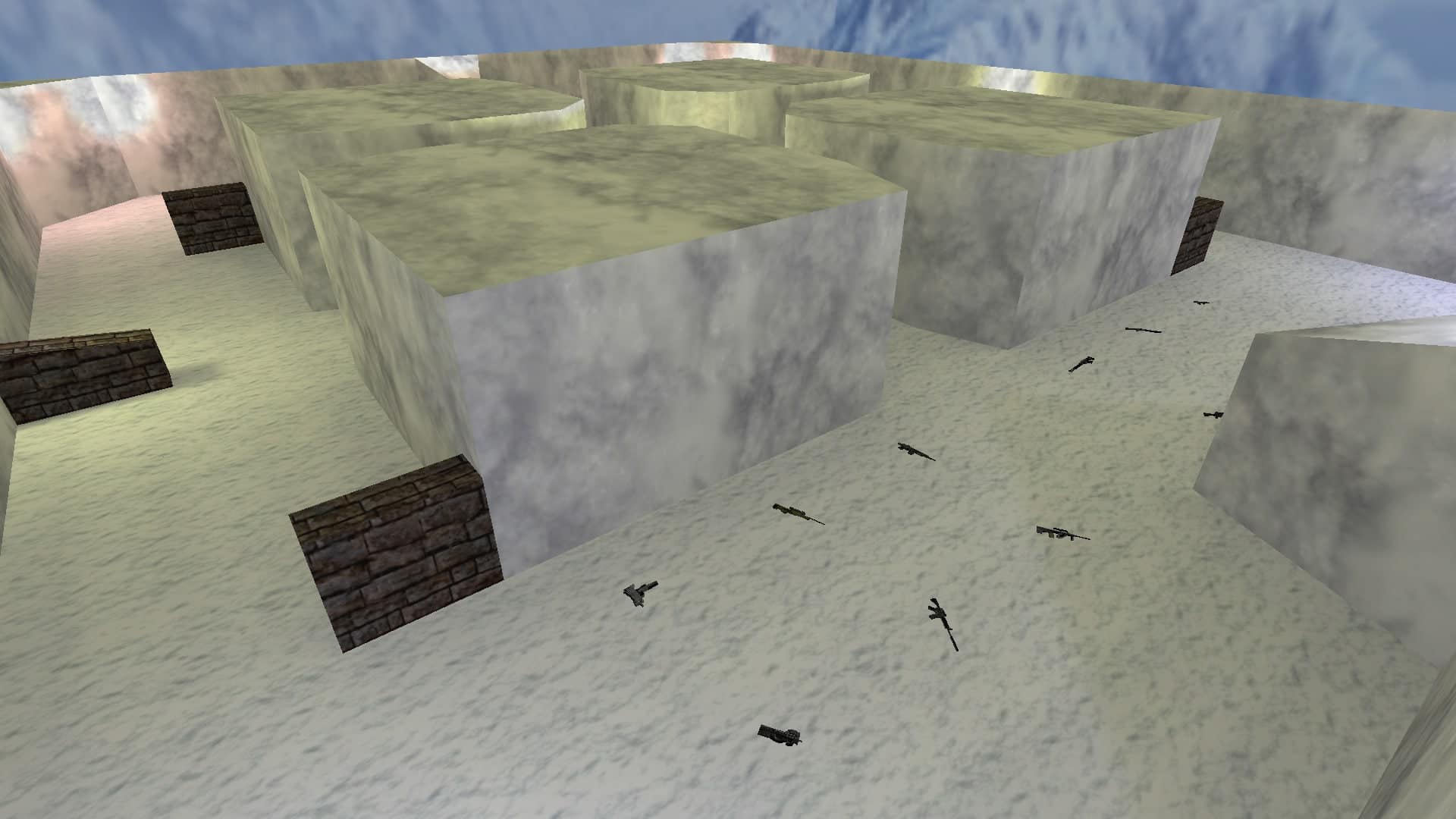 I remember playing a Counter-Strike map in 2001 called fy_iceworld. It was a small simple grey killbox of a map that virtually anyone could’ve made within the first few hours of downloading the editor tools.

fy_iceworld quickly became one of the most popular and divisive CS maps at my school. I was, of course, one of the haters. I tried to convince my friends to vote against fy_iceworld on our local internet cafe’s CS server, but they argued that I was just salty about being bad at it (which was partly true) and they forced the mapchange anyway. Similar conversations played out across countless clan servers, cyber cafes, PC bangs, and LAN parties around the entire world.

To properly gauge fy_iceworld’s influence and legacy, I asked several working level designers for their takes. Should we love it or bury it?

“I just didn’t get it,” says Shawn “FMPONE” Snelling, co-designer of the popular and critically acclaimed map de_cache for Counter-Strike: Global Offensive. “It’s a box. There are guns. It showed me that at least some people are pretty easily entertained.”

Snelling isn’t wrong. fy_iceworld is basically a small cold square, cut symmetrically into a simple four block grid pattern. It takes approximately 10 seconds to traverse and memorize the entire map. The Counter-Terrorist (CT) team spawns on the blue side of the map and the other Terrorist (T) team starts on the red side. In a radical departure from the typical gameplay of Counter-Strike, players often have direct line of sight into the other team’s spawn area from the very start, and there’s a different gun under each player start. So based on your randomly assigned spawn point, you will either start in instantaneous danger or brief safety, with either a pistol, SMG, or rifle at your feet. Sometimes you have terrible luck and you’ll die within seconds. Either way, rounds are often over in less than a minute.

“I remember being at LAN parties and playing it for hours on end,” says Bram Eulaers, an environment artist at Valve. “It has all the fun micro gameplay moments of Counter-Strike, but in a quicker succession than ‘normal’ maps.”

Unlike the official Counter-Strike map cycle, fy_iceworld has no overarching hostage rescue (CS_) or bomb defusal objective (DE_). Instead the map is prefixed with FY_, commonly interpreted as “fight yard.” It’s a plain old team deathmatch gun game format that discards much of Counter-Strike’s team-based gameplay, and to detractors, it seems to dumb down what’s otherwise a complex strategic game.

“Pick up a gun,” instructs the readme file, “And don’t die.” That’s it. Back to basics.

David Johnston, designer of some of Counter-Strike’s most iconic maps like de_dust and de_dust2, agrees that focus on the basics is exactly why it works.

“My impression is that its wide appeal is courtesy of its extreme simplicity and the degree of escapism it provides versus, for example, another round of Inferno or Dust,” says Johnston. “While I think I’d call it a ‘gimmick’ map by virtue of eschewing the normal rules of CS level design, it’s evidently managed to find a degree of fun that regular, more complex maps can’t provide, whilst also seemingly offering just enough depth and replayability to gather such a strong following.”

But where exactly is that supposed depth and replayability, asks FMPONE. “Compared to stuff like surfing that was almost more elegant than the real game, something like fy_iceworld went the other way,” says FMPONE. (Surfing maps exploit physics glitches to let players slide across abstract landscapes at dizzying speeds.) “fy_iceworld showed that modding allows a pretty wide spectrum of sophistication to find an audience in your game.”

The phrase “wider spectrums” sound kind of positive and progressive, but this is actually a skeptical argument that hinges on taste. By this argument, fy_iceworld widens the spectrum in the wrong direction, shifting the window of design discourse away from desirable design values like elegance and sophistication. Its sin isn’t so much in its deviation from typical Counter-Strike gameplay, but rather in its failure to replace that lack of typical Counter-Strike gameplay with anything else. Which begs the question, what is Counter-Strike really about, anyway?

To Eulaers, fy_iceworld represents the essence of Counter-Strike’s fast-paced twitch gunplay: “It’s basically a very condensed version of Counter-Strike. Small rounds and a map size small enough to keep a mental model of in your head, creating hide and seek situations that don’t last too long.”

Maybe fy_iceworld shows how games are fragile temporary things. We can’t even agree what the game is about. There’s more than one Counter-Strike because each of us is playing our own idea of it. Everytime we get together on a server, every player is temporarily agreeing to let their mind intersect with every other mind, and together, we construct this momentary shared instance of Counter-Strike as our assumptions and logic clash.

As a former hater of fy_iceworld now fascinated by its legacy, I think its most interesting design feature is its buyzone location in the middle. Normally in Counter-Strike, the buyzone is a special area where you can buy weapons, armor, and other equipment. The zone usually encompasses the team’s entire start area so that you can safely purchase your loadout at the start of the round. In contrast, fy_iceworld’s buyzone rests obliviously in the center of the map in a dangerously cramped no man’s land.

This placement makes it extremely difficult to spend any money, which basically blocks off Counter-Strike’s central progression and loadout system while creating this funny risky incentive to rush into the middle before the buytime closes. 95% of the time, you’ll just get gunned down from 3 different sides. But if you’re lucky, you can run in, buy a grenade, and toss it into the other team’s spawn, and it feels like you’ve gotten away with something. The military-industrial complex as a slapstick farce.

fy_iceworld was basically a Counter-Strike mod without a giant team or any custom code. It changes the entire game with a handful of blocks. In this way, fy_iceworld is so elegant that it’s like a force of nature, a primal manifestation of level design asserting its control over the rest of the game.

Andrew Yoder, an industry level designer who’s worked on Paladins and Warframe, thinks of fy_iceworld in such universal cosmic terms. “fy_iceworld feels like one of those ur-layouts”, says Yoder, “like Doom 2’s Dead Simple or Unreal Tournament’s DM-Morbias — like it came into being as a natural consequence of the game mechanics, inevitably.”

“Any map that achieves stats with such little apparent effort deserves to be celebrated,” says Johnston. “Maps with many times as much invested effort frequently fail to achieve the same degree of significance. I think it’s important to demonstrate that there’s plenty of room outside of the official map rotation for innovation and success.”

It’s tempting to consign fy_iceworld to an older bygone era of level design and shooters, outside of “official” mainstream design. It symbolizes amateurism and simplicity, at a time when huge big budget open world games and giant sweeping battle royale maps dominate the first-person shooter market.

But this is also a map that transformed survival into an absurd lottery based on the gun you happened to spawn over. fy_iceworld is the last desperate fight in the final circle of a battle royale, over and over. To call fy_iceworld “influential” is an understatement. It contains the foundation of so many games inside itself.

“Someone must have originally designed fy_iceworld,” says Yoder, “but it feels like anyone could have, and would have eventually. And because it’s so fundamental, there’s a little bit of fy_iceworld everywhere in CS and other tactical shooters. You could argue fy_iceworld is also the simplest version of the 3-lane format, which, to go all galaxy brain, means the MOBA map is also fy_iceworld.”

Indeed, I argue that you can witness bits of fy_iceworld’s DNA everywhere, blasted and seeded across the entire landscape of the game industry, as long as you have the blacklight to trace its ropes of influence. Perhaps its most famous direct descendant is Shipment, an official multiplayer map for the original 2007 release (and 2019 remake) of Call of Duty: Modern Warfare.

Shipment is a small, compact, and suspiciously familiar multiplayer arena by Infinity Ward level designer Geoffrey Smith. There are three main lanes with four blocks in the middle, and four walls surrounding it, that’s it. Pick up a gun and don’t die.

The 2007 version of Shipment makes a few notable deviations from fy_iceworld. First, it’s considerably bigger and wider, to accommodate Call of Duty’s gun ranges and player speeds. Modern Warfare’s focus on gritty noisy realism also demands a change of theme, from a cartoonish iceberg to a bleak shipping yard near Chernobyl. Some of the shipping containers happen to be open, providing cover and interiors that basically double the complexity of the original map layout. Smith’s most brilliant design gestures here are the red open containers flanking the left and right sides of the map; their subtle angled placement breaks player sightlines from the rest of the map grid and provides some precarious cover.

The 2019 remaster of Shipment relocates the map to a slightly less bleak shipping port in London, but at first even the dedicated Shipment fans condemned this remake as “unplayable” — partly because the angled shipping containers had been re-aligned with the rest of the map, further reducing the cover in an already sparse map layout. It shows how minimalism amplifies the impact of every detail. Of course, Shipment has proven wildly popular anyway. Infinity Ward even rolled out a dedicated “Shipment 5v5” playlist for the players who just want to play on Shipment over and over, nonstop. Just like the “fy_iceworld 24/7” servers of yore.

Shipment and its sibling Shoothouse are so beloved that the recent removal of the “Shoot the Ship” playlist spurred an editor for RPS fansite Eurogamer to issue a stern editorial chastising Infinity Ward: “I wish Call of Duty: Modern Warfare let me play the maps I want when I want.”

This is perhaps the central tragedy of fy_iceworld. The game industry benefits from its legacy, but the conditions that spurred its influence no longer exist. Call of Duty: Modern Warfare 2019 does not offer a freely downloadable level editor for players to make new custom maps, nor does it allow a decentralized network of player-managed multiplayer servers to distribute these custom maps. We can only play what someone else has decided for us. This climate change has ensured that there will never be another fy_iceworld.

Before he was multiplayer design director at Infinity Ward, Smith made custom Counter-Strike 1.6 maps under the name “compoSITe”. As an avid CS 1.6 player and amateur mapper, he was almost certainly familiar with fy_iceworld. He’s also no stranger to remaking classic maps: the official Call of Duty: Modern Warfare 2 multiplayer map Karachi is based on his own CS 1.6 map de_karachi01.

Smith’s career follows the classic “modder to AAA” success story that I’ve written about before for RPS. These stories are always inspiring and encouraging, especially for level designers aspiring to work in the game industry, but this myth of modder meritocracy persists only because of all the unexamined “failures”: the people who had so much promise and talent, yet never got the luck and privilege to succeed.

So fy_iceworld’s legacy is only half of this story. We also need to hold space for the author of fy_iceworld: who are they, what happened to them, and why did they get so little credit for their achievement?