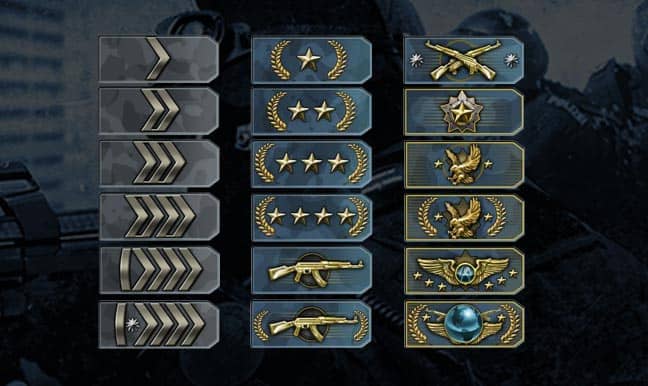 Making the climb from Nova to Legendary? We uncover the inner workings of CS:GO’s ranking system.

CS:GO players take a lot of pride in their ranks. Ranks represent countless hours spent learning the game and applying your skills alongside teammates. But for how much players tend to fret over their arbitrary skill group, there’s not much info out there about how the ranks work. Generally, playing better will eventually rank you up, but Valve remains tight-lipped about the inner workings.

To help you understand this system better, we’ve collected the best-available information from Valve and a variety of other sources.

CSGOStats, an independent analysis website provides a breakdown of the rank distribution, showing the percentage of active players in each rank over a day, week or month. This data is collected through randomly sampled matches, so extending the catchment period to a month gives a good idea of how the ranks spread out.

In the sample above we can that the average rank is Gold Nova 3, with around 35% of all players sampled in the Gold Nova bracket. If you’ve earned your way to Legendary Eagle, congrats, you’re in the top 5% of matchmaking players. In fact, you might be even higher than you think. The site’s random sampling technique means that because higher ranked players will, in general, play the game more often, they are disproportionately likely to be sampled. But what does each rank actually mean, and how does the game determine where to place you?

Unsurprisingly, Valve has kept incredibly tight-lipped when it comes to the inner workings of its games, for fear that some players might game the system itself, prioritising their own progression over the success of their team. But back in 2015, a Valve employee let slip that CS:GO initially based its matchmaking on the Glicko-2 ranking system, though it has since been adapted and improved, involving some heavy modifications.

Chances are you’ve heard of Elo ranking. Designed for player vs player competitions such as chess, each combatant is assigned a number to represent their rank. The difference between two competitor’s numbers indicates the expected outcome of the match, with the victor claiming points from the loser. Should the player of higher rank win, he’ll take significantly fewer points than the lower player would, outcome reversed.

Since the adoption of Elo, many variations have been designed to combat some of the system’s flaws. Glicko-2 is one such alternative, assigning a Ratings Deviation (RD) around a base number. A player’s Match Making Rank (MMR) then becomes a range (e.g. [1000-2000]), rather than a single number (e.g. 1500). This improves accuracy; the system can then say it knows a player’s rank will lie within this bracket to a 95% certainty. The better the system knows your real rank, the smaller this range will be. Glicko-2 also takes into account a player’s ‘volatility,’ how much a rank is expected to fluctuate over time (increased through erratic performances, decreased through consistency).

However, despite Glicko-2 being an open system, clear limitations stop it from applying directly to CS:GO. Both Elo and Glicko were designed with 1v1 competition in mind. In a 5v5, team-based game, far more factors come into play. An individual player’s impact on a game is a difficult thing to judge. Sure, one player can earn four kills in a round, but that may only be because of an ally securing the bomb-plant, or placing a well-timed flash. From K/D ratios to MVPs, performance statistics are varied, and Valve has said nothing about how they’re taken into account with regards to rank. In response to this silence, some players have their own theories on how CS:GO’s ranking system works.

Back in 2014, Steam user RetriButioN posted a lengthy record of his experience ranking up multiple accounts. He’s since updated the guide, acknowledging that all claims are based purely off his own anecdotal evidence, but it makes for an interesting read regardless. He proposes that ranking is determined on a round-by-round basis, adjusting all players involved to redetermine the expected winner. This method could explain why players sometimes rank up on a lost game, given a close scoreline. The chances of this occurring are extremely low, but multiple players have reported unexpected changes in rank—see Infamous_Blue’s comment here as an example. However, these cannot act as hard evidence for a round-by-round system, as external factors (e.g. previous games being removed due to a detected cheater) can also influence your ranking during a match. These outside events are more likely to explain especially bizarre claims like deranking after a 16-0 win.

RetriButioN also goes on to claim that, aside from winning and losing the round, MVPs are the only factor to affect your ranking score. The logic behind this and the guide came from the use of console command, ‘developer 1,’ which revealed a ranking number that changed based on rounds and MVPs. However, Valve has dispelled this claim, confirming that files stored on the user-end no longer affect ranking. However, if MVPs previously played a role, there’s chance that they still do. Recently, reddit user dob_bobbs shared his own thoughts, covering the workings of the Glicko-2 system and suggesting that a high volatility may limit the loss or gain of points. The logic behind this is that a player may have an unusual bad patch or lucky streak, not indicative of their true skill, meaning that time to establish the trend is needed.

What we know for certain

With many fan theories floating around, it can be easy to get lost down a rabbithole of guesswork, but there are some key takeaways from what’s been learned.

A wide number of factors affect your ranking, and it’s all stored by Valve.
“All computations are performed on our matchmaking backend and multiple matchmaking parameters describing scientific set of rating variables of a player are represented to players as [their rank],” posted vitaliy_valve in response to RetriButioN’s guide. No matter how much data mining someone claims to have done, they cannot know the details of the matchmaking system. With a number of variables in effect, it’s better to focus on winning the game than arguing over factors like who gets to defuse the bomb, even if someone tells you otherwise.

The more games you’ve played, the harder it will be to change your rank.
The nature of Glicko-2’s Rating Deviation means that the longer you play at a particular level, the more precisely the game will believe it has determined your appropriate rank. With a smaller RD, larger jumps in your MMR become improbable. If you’ve ever seen a popular streamer or Youtuber attempt to rank an account from Silver 1 to Global, you’ll notice that it usually takes a long time to progress during the Silver stages. This happens because the account has been intentionally deranked by a player losing repeated games on purpose. During this time, the rating system will believe it has obtained a good idea of the player’s true rank, and therefore responds slowly to subsequent victories. This isn’t to say you’ll never be able to climb the levels again. Given consistent hard work and competition with those above your level, your RD will widen again, allowing greater steps up.

A hiatus will reduce your rank’s certainty, but often leads to degradation.
Quit playing CS:GO for a month, and you’ll find your skill group has vanished, requiring a draw or win to earn it back. If you stop playing for longer, there’s a good chance you’ll return at a different rank than before. It has often been suggested that MMR decays over time when inactive, but again it’s tough to find evidence to back this up. The most probable cause for degradation comes from increases in Rating Deviation.

The longer it has been since your last match, the less certain the game can be of your level, which means you could be matched against players of a wider skill range than you would normally. If you’re in the upper half of the skill groups, you’re more likely to be matched against those lower than you due to the larger pool of players. However, if you find your rank has dropped then it’s best not to worry, as your increased RD should allow faster recovery.