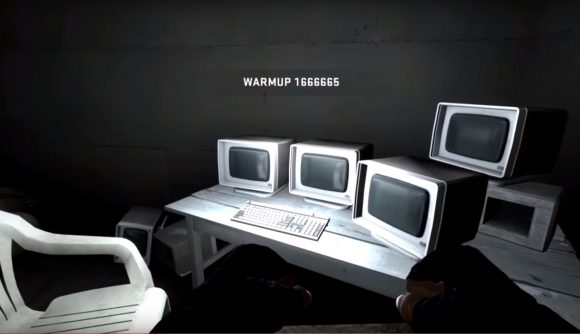 Something weird is going on with Counter-Strike: Global Offensive’s new battle royale mode, Danger Zone. Players have discovered a bank of computers that are hidden behind a surface-level joke that they think might be a hint from Valve about… something.

There’s a lot to unpack here, and at this point nobody outside of Valve is sure of what’s even happening. However, here’s what’s got the community buzzing. Near the tourist compound on Danger Zone’s only map, Black Site, there’s a motel-style building with numbered rooms. Room three is boarded up and inaccessible – get it? It’s a Half-Life 3 joke, right?

Well, not so fast. There’s a secret entrance to Room 3 from an adjacent room. Inside, as YouTuber snaileny discovered, you’ll find a table with several computer monitors sitting on it, and if you stand close, you can hear something – it’s a sequence of tones, followed by a voice speaking a sequence of numbers and letters in the NATO phonetic alphabet. It’s clearly a code, and Reddit has been busy deciphering it.

Reddit’s ad hoc team of cryptographers found that it was the opening words to Portal’s memorable closing song, Still Alive. “This was a triumph, I’m making a note here: HUGE SUCCESS.”

YouTuber Valve News Network (not actually affiliated with Valve, mind you) has run through the facts as they’re known so far, and you can see his sum-up in this video, which he published today:

In it, he points to where the investigation is headed as we speak – one redditor, for instance, discovered that several surveillance cameras on the Black Site map have sightlines that converge on a sunken ship. There’s a large collection of seemingly unused “test pattern” textures that have been unearthed in the game files.

Nobody knows what it means, but as Valve News Network points out, this is eerily familiar to the ARG Valve ran to foreshadow the announcement of Portal 2.

Right now, Valve News Network is live-streaming his attempts to work out the puzzle – he’s been digging through game files, CS:GO update posts, and anything else he can get his hands on, looking for clues.
There’s no telling what’s up yet, but there are enough breadcrumbs on the floor now to say pretty conclusively that Valve is up to something.