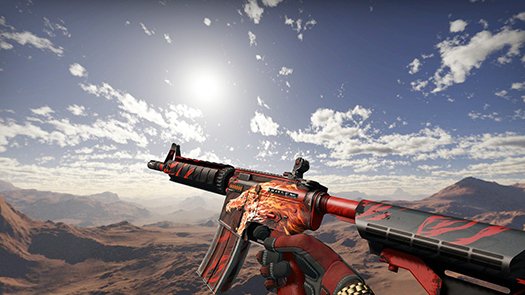 A post on social media has shown what most players who have played on both 64-tick and 128-tick servers have likely already felt. Tick rates can affect weapon accuracy in Counter-Strike: Global Offensive.

There is a difference between how quickly CSGO’s weapons reset their accuracy values between the two types of servers. This can cause some weapons, especially the M4A4, to be more accurate during burst fire.

The cause is hard to pin down. CSGO’s netcode uses interpolation to smooth out player movements and actions to compensate for lag. Without it, players would see jerky movements and even more missed shots than they currently do. But it seems like playing on 64-tick servers is even more of a different experience than players thought.

A 128-tick server, like those provided by FACEIT and ESEA, communicates with players computers twice as often as do Valve’s 64-tick matchmaking servers, resulting in a better experience overall. Due to the way interpolation works, it means that the server has less guessing to do overall given the amount of information available on the servers that are running at 128 ticks per second.

It has already been established that certain grenade throws in CSGO, most especially jumpthrows, are affected by tickrate. Some grenades thrown from the same position and in the same way can land in completely different places depending on the type of server. A cause hasn’t been nailed down to explain the quicker accuracy recovery that has been shown, and it will be difficult to tell the exact reason why the recovery date differs until Valve makes an official comment on the subject.

It does give further explanation to what many players have been saying for years.

Since the release of 128-tick servers from third-party providers, players have expressed that their shots feel more crisp and accurate on the improved server hardware. Until now, most chalked that up to the server’s increased tickrate and how it registers shots. But with the reveal that CSGO’s weapons actually recover faster and become more accurate more quickly, there’s now some real substance to go along with this theory.